Helene Leonetti M.D. performed a double blind study in presented in Obstetrics and Gynecology 1999 that menopausal symptoms such as hot flashes were reduced by progesterone cream in 83% of women as compared to 19% of women using a placebo. A Norwegian study in the Journal Maturitas found that low testosterone, and DHEA levels were associated with hot flashes, but high levels of these hormones protected against hot flashes. Progesterone was not measured in the Maturitas study.

Dr. Graham Colditz professor at Harvard medical school at talk in San Francisco in February 1994 for the American Association for the advancement of science showed the following graph:[1] 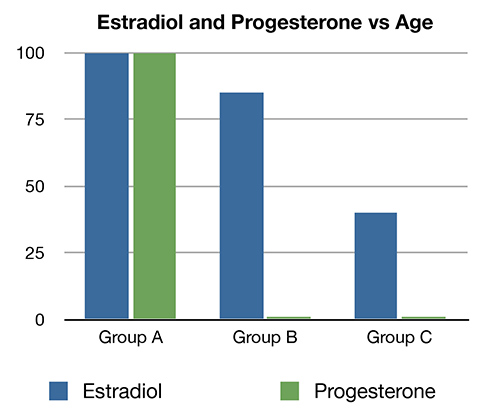 How Does Menopause Work?

The hallmark of menopausal symptoms is hot flashes. The hypothalamus below the brain looks at estradiol and progesterone levels. When estradiol and

When the ovary cannot produce any more estradiol and progesterone, the hypothalamus begins to panic, and begins to release more gonadatropin releasing hormone, GnRH. Both LH and FSH rise, but estradiol and progesterone cannot rise because the ovary is not producing any follicles anymore. The shouting hypothalamus begins affecting areas next to it in the brain. These adjacent areas are called the vasomotor center or the arcuate nucleus of the hypothalamus. The arcuate nucleus of the hypothalamus controls capillary dilation and sweating. It is hypothesized that these women get the hot flashes and night sweats because of the "shouting" GnRH. There may also be mood swings, fatigue, feelings of being cold, and strange responses to stressors. Women may also have symptoms of hypothyroidism despite normal thyroid levels.

To Summarize the Body’s Feedback Mechanism for Menopause:

1. The hypothalamus signals to increase estradiol and progesterone by producing GnRH.

3. After menopause, the ovaries no longer have follicles that make estradiol and progesterone.

5. Increased GnRH stimulates the arcuate nucleus of the hypothalamus to create hot flashes and night sweats.

There is another wrinkle in the study of hot flashes and night sweats of menopause. Nonindustrialized cultures don't suffer from menopausal symptoms.

John Lee M.D. believes that mother nature did not make a mistake, we did. He observes that in non-industrialized cultures not subjected to xenoestrogens, progesterone being low is rare indeed. Also he observes that a majority of these women in the cultures have healthy ovaries with healthy follicles producing sufficient progesterone. He believes diets high in vegetables and fruits with all minimum of processed foods makes for healthy follicles. Processed foods lack vitamins. Our modern vegetables and fruits are also grown in deficient soils. [2] 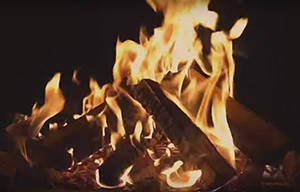 John Lee M.D. believes that the menopausal symptoms can be avoided by correcting the relative insufficiency of progesterone. He also advocates good nutrition, toxin avoidance, and exercise. He would usually give topical natural progesterone for the menopausal syptoms of hot flashes and night sweats. His clinical experience is that progesterone supplementation results in the disappearance of facial hair and regrowth of scalp hair. He notes that most active androgen is testosterone. Estrogen decreases testosterone's clearance from the body. However, when progesterone is added, the clearance of testosterone goes up and the androgen effects of facial hair and male pattern baldness reverse.

What to do for the Night Sweats and Hot Flashes, the Symptoms of Menopause

I usually give 20 to 60 mg of topical progesterone to get rid of the symptoms of menopause. I increase the transdermal progesterone until the symptoms of menopause stop. Then, the transdermal progesterone can be slowly tapered off during a period of six months to a year. It is important to remember that it is not the absolute values of progesterone that triggers the vasomotor cortex of the hypothalamus, but it is the relative change that triggers the hypothalamus and GnRH release. That is why it is essential to SLOWLY taper off the progesterone over a period of 6 months to a year. Alternatively, if you want to take progesterone indefinitely, you can take progesterone for three weeks and then have one week holiday. The one week holiday is necessary so that the progesterone receptors do not down regulate to become less sensitive to progesterone. Occasionally, estriol can be added if progesterone is not enough. I usually use 0.5 mg every other day taken along with progesterone. Is important to use estriol only every other day because the half-life excretion rate is long. If you use estriol every day there might be unhealthy buildup of estriol. Some doctors like to add testosterone. But most of the time, estriol and testosterone is not needed. It is more important to avoid xenoestrogens, and other hormone disruptors.  Emotional stress can also be a strong factor.  I had one patient take a 2 week trip to Maui and have all hot flashes and night sweats stop.  She was not even taking progesterone or any other hormone.

Another study by Wren used 80 women in a double blind randomized placebo controlled experiment to evaluate topical transdermal progesterone usage in women with menopausal hot flashes [4].  Unfortunately, the progesterone cream that they used contained several other ingredients known to have hormonal effects or endocrine disrupting effects as well.  The cream that they used contained aloe vera, lanolin, black cohosh, mexican wild yam extract, and burdock root as well as many other ingredients.  Aloe vera is used in some cultures to create miscarriage.  I do not agree with this morally.  In some cultures, if you do not want your pregnancy, and you drink enough aloe during the first trimester this will create a miscarriage.  Anecdotally, I have found that women drinking large amounts of aloe find that progesterone cream has no effect.  The dosage of aloe to create a miscarriage is extremely important according to Bullough.  What dosage of aloe was used in the progesterone cream that they used?  They did not say.  Aloe active comopnents can vary with batches, when they are harvested, and what part of the plant is used.  Did they measure the active component of aloe that blocks progesterone?  Sadly no.  Aloe vera put topically on the skin is absorbed into the body, and may also block progesterone at the receptor level [5].  Lanolin typically is contaminated with pesticide, and many pesticides are known endocrine disruptors or hormone disruptors.

This study with 80 women did not find any change in vasomotor symptoms, mood chararacteristics, or sexual feelings. There was no change in blood lipid levels or bone metabolic markers despite a slight elevation of blood progesterone levels.  They concluded that transdermal progesterone was ineffective for menopausal symptoms. [3]

First, neither study controled all the other topicals on the patients bodies' such as shampoo, lotions, cosmetics, laundry detergents, and tooth paste.  All these topicals contain chemicals or herbs that will interact with progesterone.  Aloe in the progesterone cream, in the second study, will block progesterone making progesterone ineffective.

Are the patients using other products with aloe in them?  They did not look for it.  Most things put on the skin are absorbed into the body.

Here is an experience from one of my patients.  Thank you to Sue G., in Maryland in Feb. 2, 2020 for sharing her experience.

I found this blog to be extremely helpful in my search to eliminate my symptoms (specific to menopause):

That blog may also explain why the Progestelle in Olive Oil is effective, since olive oil has an anti-histamine effect.

Removing these foods will only help those women who have underlying histamine allergy/reactivity, which can be exacerbated by hormonal fluctuations.

Now my cycle is pretty much back to normal, I'm not taking anything other than basic supplements, and I can trace back perimenopause symptoms (usually within minutes to a few hours) to eating a specific food (eating out at restaurants is difficult…) & being within a week of my period.  And also b/c of progesterone fluctuations, my tolerance for the histamine foods fluctuates as well and so tomatoes for the first 2 weeks of my cycle barely bother me vs. the last 2 weeks...

This took a few months of experimenting!  And I can say without a doubt, the worst offender is sunflower oil.  Ugh!