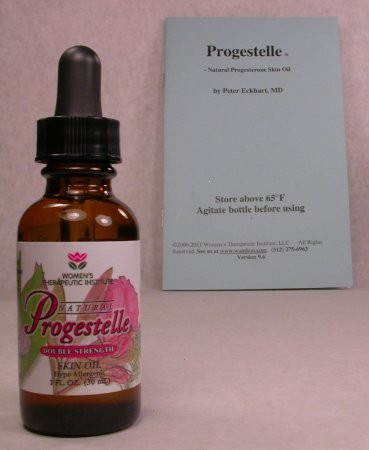 Another study used 80 women in a double blind randomized placebo controlled experiment to evaluate topical transdermal progesterone usage in women with menopausal hot flashes [2].  Unfortunately, the progesterone cream that they used contained several other ingredients known to have hormonal effects or endocrine disrupting effects as well.  The cream that they used contained aloe vera, lanolin, black cohosh, mexican wild yam extract, and burdock root as well as many other ingredients.  Aloe vera is used in some cultures to create miscarriage.  I do not agree with this morally.  In some cultures, if you do not want your pregnancy, and you drink enough aloe during the first trimester this will create a miscarriage.  Anecdotally, I have found that women drinking large amounts of aloe find that progesterone cream has no effect.  The dosage of aloe to create a miscarriage is extremely important according to Bullough.  What dosage of aloe was used in the progesterone cream that they used?  They did not say.  Aloe active comopnents can vary with batches, when they are harvested, and what part of the plant is used.  Did they measure the active component of aloe that blocks progesterone?  Sadly no.  Aloe vera put topically on the skin is absorbed into the body, and may also block progesterone at the receptor level [3].  Lanolin typically is contaminated with pesticide, and many pesticides are known endocrine disruptors or hormone disruptors.

This study with 80 women did not find any change in vasomotor symptoms, mood chararacteristics, or sexual feelings. There was no change in blood lipid levels or bone metabolic markers despite a slight elevation of blood progesterone levels.  They concluded that transdermal progesterone was ineffective for menopausal symptoms. [2]

First, neither study controled all the other topicals on the patients bodies' such as shampoo, lotions, cosmetics, laundry detergents, and tooth paste.  All these topicals contain chemicals or herbs that will interact with progesterone.  Aloe in the progesterone cream, in the second study, will block progesterone making progesterone ineffective.

Are the patients using other products with aloe in them?  They did not look for it.  Most things put on the skin are absorbed into the body.

Chemical estrogens, endocrine disruptors, xenoestrogens, phytoestrogens, or environmental estrogens are the cause of most women's female diseases. If these women remove xenoestrogens from their environment, then the bad side effects from progesterone will stop. Many customers, after cutting out these chemicals and herbs, find that they do not need progesterone after several months. The goal is just to be healthy without taking anything at all.  From 1999 until 2015, we have compiled a list xenoestrogens to avoid.  I have also compiled a list of safe products to use as well.  If the patients only use products from that "safe"list, then many times the disease disappears.

A cosmetic cream is oil mixed with water. An emulsifier allows oil and water to stay together. A thickener is included to the oil/water emulsification. A preservatve is added to the cosmetic cream to prevent bacterial growth in the cream.  Unfortunately, many times the preservative added is a xenoestrogen.  When the topical cream is applied to the skin, the water evaporates, and only the oil is left on the skin. The progesterone is an "oily" compound.  The progesterone dissolves in the oil.  Progesterone does not dissolve in water. Many of these chemicals such as the emulsifier have an unpleasant smell.  Thus, a fragrance is added to cover the smell of the emulsifier.  The fragrances natural or synthetic are many times estrogen mimics and will act in synergy with estrogen creating Estrogen Dominance and make your disease worse.

Progestelle is only fractionated coconut oil and natural bioidentical progesterone.  I believe less is more. In some cases, 1 out of 400 people, there is an allergy to coconut oil. In these allergy cases, we have progesterone dissolved in olive oil or grapeseed oil.  However, it is diluted by twice as much.  The most important thing to remember is that it is NOT about the progesterone.  It is about everything else that you are putting on the skin.

The Progestelle is in a glass bottle for 2 reasons:  1. Some plastics outgas into the product with byproducts that can be xenoestrogens.  BPA comes to mind.  2. Plastic can also let oxygen through.   The oxygen can oxidize and destroy the progesteorne.  Glass does not allow oxygen to pass through.  Oil also stops oxygen.  In contrast the water in creams contains oxygen and usually oxidizes the progesterone and destroys the progesterone over a period of a year.  Our product does not contain water and does not contain oxygen and can last longer than comparable cream in terms of shelf life.

Progesterone wakes up the estrogen receptors back to normal and then you become worse.

This product hasn't received any reviews yet. Be the first to review this product!