Early Puberty in Girls: A Simple Cause and Treatment

The most common cause of early puberty in young girls is chemicals and herbs that act like estrogen.  This excess estrogen causes this precocious puberty in girls.  The most common route of exposure is topical through the skin.  Anything on the skin is 10 times the potency of what is taken orally because it bypasses the liver and is absorbed directly into the body.  Anything taken orally is 90% first pass inactivated through the liver.  But anything taken topically in the skin goes straight into the body.

Estrogen causes growth.  It is standard practice among farmers to give estrogen hormones to cattle, chickens, and pigs to make them grow up faster to maximize profits.

Precocious Puberty Cause and Cure

The solution is simple.  Change all the things that contact the skin to products that do NOT contain chemicals or herbs that mimic estrogen.  These chemicals and herbs are collectively known as xenoestrogens and are hormone disruptors.  The difficulty is identifying the toiletries and cosmetics that do NOT have hormonal effects.

If you buy any product from us, you will get a list of safe products to use on the skin.  It may take 1-3 months of using these products to allow the hormone disruptive products to wash out of the body.  Then, usually the early puberty will reverse itself.  If it does not reverse, typically, there is a hidden source of xenoestrogens that the child is being exposed to.  The precocious puberty may take as long as 6 months to reverse once the hormone disruptive cosmetics, toiletries, and laundry detergents are stopped.

How Common is Precocious Puberty? What Age Do Girls Normally Start Puberty?

Precocious Puberty is very common.  The Herman-Giddens study published in 1997 in the Journal of Pediatrics showed that early puberty in girls was a common occurrence in American Society.  17,077 girls were examined.  9.6% were African-American and 90.4% were white.  Among girls aged 3 years old, 1% of white girls and 3% of African-American girls demonstrated breast or pubic hair development.  Aged 8 girls, 48.3% of African-American girls and 14.7% of white girls had begun development of breasts buds and pubic hair marking precocious puberty.  Their conclusion was that these were the new norms in medicine and they needed to be embraced.  However, in my opinion, at that time, the authors of the study, although meticulous and brilliant, did not consider the vast amounts of data collected on estrogen mimicking chemicals and herbs being observed in wildlife in America.  Fish and animals across the board are being similarly affected.  Herman-Giddens recently commented, “Each individual girl is exposed to multiple factors in today’s environment, many not present decades ago, that may potentially influence her pubertal onset.” [1]

A more recent study was carried out by Biro published in 2013 in the Journal of Pediatrics. They studied 1200 girls comparing breast development (thelarche) with Body mass Index, race ethnicity in the 3 puberty study sites of the Breast Cancer and Environmental Research Program.

Girls aged 6-8 at enrollment were followed periodically from 2004 to 2011 in San Francisco Bay Area, Greater Cincinnati, and New York City.  Tanner stage puberty was used. Median age of breast onset stage 2 was 8.8, 9.3, 9.7, and 9.7 years for African American, Hispanic, white non-Hispanic, and Asians respectively.  These results were compared to two other earlier studies and breast maturation was OCURRING EARLIER in white and non-Hispanic girls. 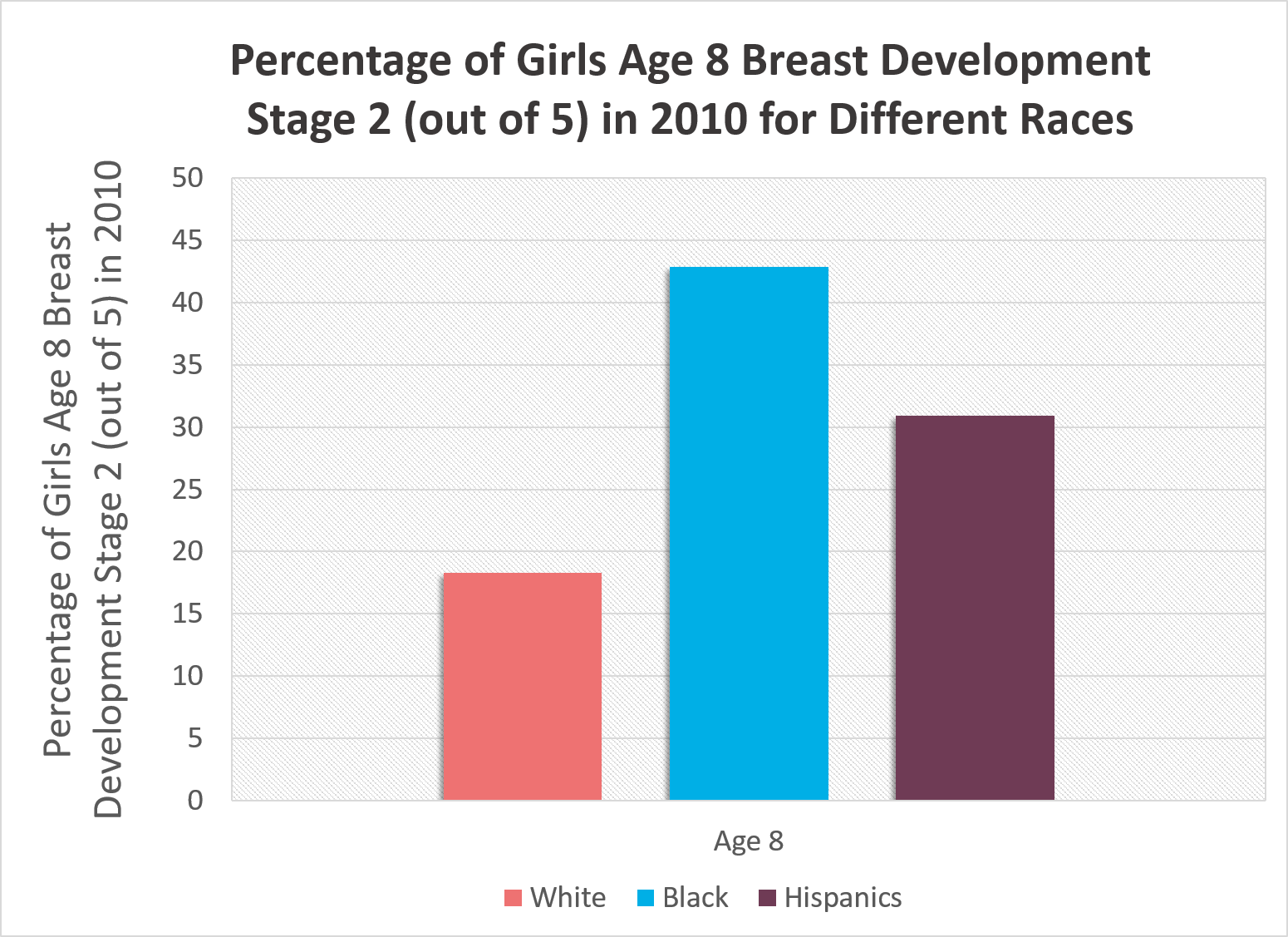 Dr. Biro observed the onset of thelarche or breast development at younger ages than previously documented, indicating an earlier start to puberty in girls.

Dr. A. Pinar Cemeroglu, a pediatric endocrinologist at Helen DeVos Children’s Hospital in Grand Rapids, Michigan says that these precocious puberty children are typically taller than their peers, but ultimately when they grow up, they end up shorter than their peers because of their early growth spurt. Dr. Biro believes that these girls are at risk for risk taking behaviors such as alcohol use, smoking, drug use, and early sexual behaviors. Adults have an increased risk if Type II diabetes and breast cancer. 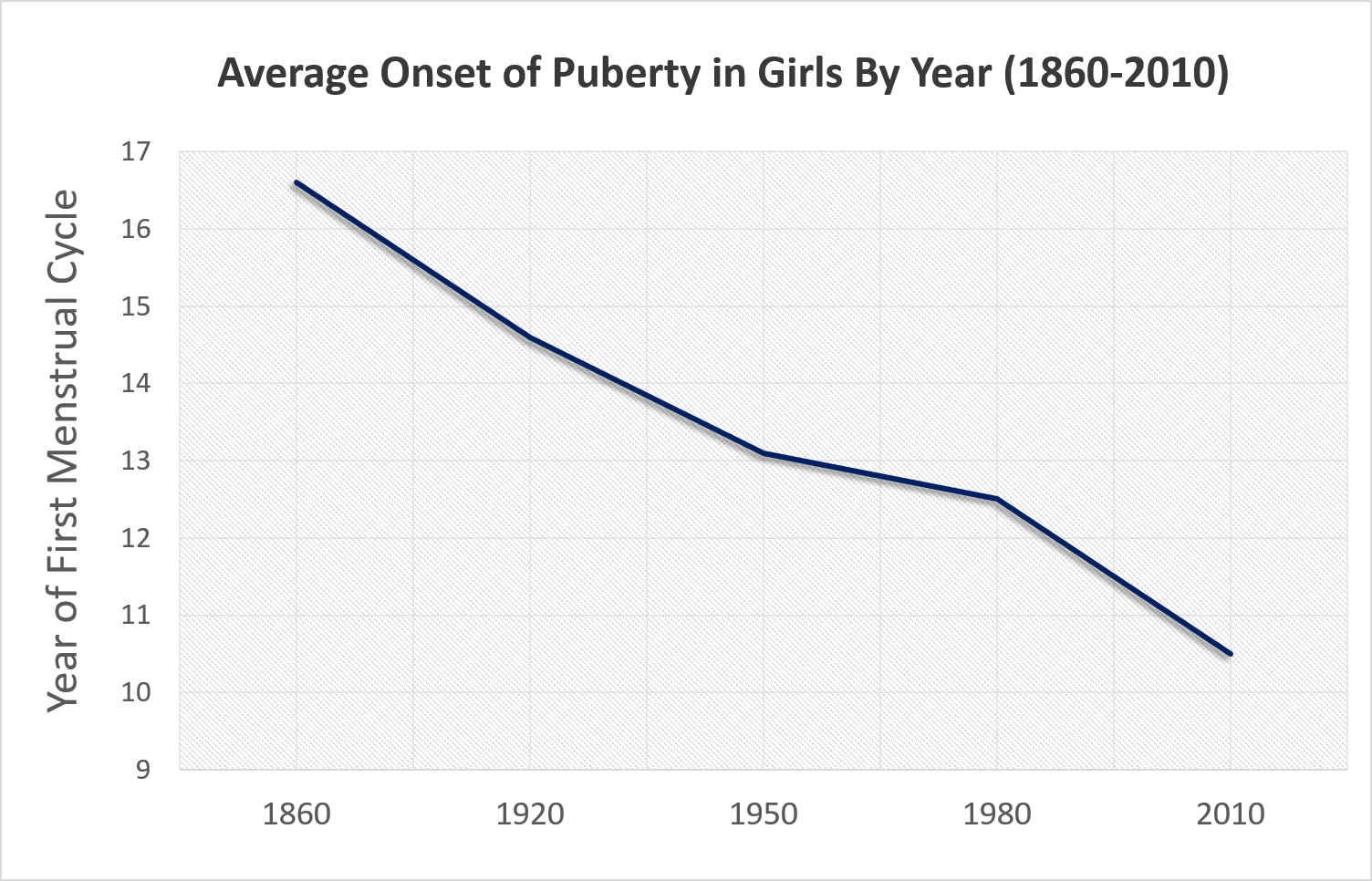 However, a Danish study of annual measurements of height and weight of 156,835 children born from 1930 to 1969 who attended the Copenhagen region showed that these children were going through puberty at an earlier and earlier age. Obese children did mature earlier. The children were divided into 5 groups of similar obesity. In all of these 5 groups, the children were all maturing earlier. This means that the obesity epidemic is not the only reason for early maturing. Many scientists believe that xenoestrogens are the culprit. [8]

For Boys, Herman-Giddens published another study in the journal of Pediatrics in 2012. 212 doctors collected stages of puberty on 4131 boys in 144 pediatrician’s offices on “normal” boys. Mean ages for the start of Tanner 2 genital development were 11.47 for whites, 10.25 for African Americans, and 11.43 for Hispanic boys. The mean ages were 6 months to 2 years earlier than earlier than past studies.

I personally believe that this shift to earlier puberty is due to the cosmetics and toiletries that are now commonly being used on the skin. [9]

Clifford Bloch, MD, a pediatric endocrinologist from Denver, Colorado had 3 young boys with gynecomastia. Gynecomastia is otherwise known as “man boobs”. He measured the boy’s own hormones and found them to be normal. This ruled out all hormones that are produced by the boy’s bodies for causing the precocious puberty. This ruled out tumors that produced hormones for causing the early puberty. Clifford Bloch, MD thought that the hormones causing the “man boobs” had to come from the environment. He noted that the parents were giving their sons tea tree oil and lavender oil. On a hunch, Bloch, MD counseled the parents to stop giving them tea tree oil and lavender oil. In 3-6 months, the “man boobs” disappeared.

The implication for precocious puberty is shocking.

We need to figure out what chemicals and herbs mimic estrogen or increase estradiol (xenoestrogens).

I started looking for xenoestrogens in 1999. I made a no-no list of chemicals and herbs to avoid. After approximately a decade, many of my patients would get well, but not all. I would query the failing patients and found that they were using shampoos and cosmetics that had xenoestrogens in them. At my wife’s insistence, I made a list of safe products for my patients to use.

I had no idea how difficult it was for my patients to find safe products to use. I looked at 500 shampoos and only found 3 shampoos that were ok. I looked at 50 laundry detergents and only found 3 laundry detergents that were ok. It took me several months to compile this list. My customers would also critique this list and add to it or subtract from it.

Many female diseases disappear when patients exclusively use this list. However, any deviation, even using small amounts of lip balm with xenoestrogens can totally torpedo all the patient’s efforts.

Iodine helps convert strong estradiol to weak estriol according to Jonathan Wright, MD of the Washington Tahoma Clinic. Taking iodine will reduce estradiol and theoretically decrease early puberty. It is the estradiol in combination with xenoestrogens that is causing the precocious puberty.

When you take iodine, toxic bromine will excreted. Bromine is from soft drinks, sports drinks, flour, commercial baked goods, some swimming pools, and asthma inhalers. We have a protocol to take iodine. Start off with small amounts and slowly increase the iodine. Don’t get too sick. Detox slowly. When you get sick from taking iodine, blame the bromine. Don’t blame the iodine.