Chemical estrogens have been used purposely for birth control since being approved in 1960. In order to safeguard profits, designer chemicals were made that are similar in structure to estradiol and progesterone that fit into the same estrogen and progesterone receptor. However, because they 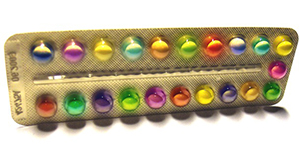 are designer chemicals, they are patentable. If they are patentable, then only the company that owns the patent can sell that designer chemical. The patent lasts for 17 years. The company has a legal monopoly for 17 years and can charge high prices. The high prices means high profits. High profits mean you can buy television advertisements, glossy magazine articles, and journal advertisements. These pharmaceutical representatives hire handsome or attractive drug representatives that go in person to doctor’s offices to woo them to use their products. In 1968, early high dose pills had side effects of blood clots, heart attacks, strokes, depression, weight gain, and loss of sex drive. In 1988, an FDA study claimed newer low dose pills decreased ovarian cancer, iron deficiency anemia, and pelvic inflammatory disease. In 2010, there are 1,100 lawsuits against the popular pill Yaz allegedly causing blood clots, heart attacks, and strokes. The federally funded Women’s Health Initiative Study concluded that there were higher risks of stroke and heart attack associated with the low dose birth control pills. Synthetic progestins (designer progesterone molecules) are listed in the Physician’s Desk Reference as causing malignant mammary tumors in Beagle Dogs. Here is a PBS website giving a short history of Birth Control Pills.

These chemical estrogens and chemical progestins, designed as substitutes for your own hormones, fit into the receptor sites for estrogen and progesterone. They act somewhat like your own hormones, but have the nasty side effects like breast cancer, stroke and heart attack.

However, during the last fifty years, it turns out that many other chemicals unintentionally also fit into the estrogen receptor. These chemicals are causing problems in wildlife and humans. See wildlife effects of chemical estrogens at Tulane University.

fish were found with female characteristics were found near sewage outlets in the United Kingdom. The feminized male fish had much fewer mobile sperm than normal. Also the male fish had livers that produced more vitellogenin, a female egg protein at elevated levels. These intersex hermaphrodite males were less fertile than normal.

Later as reported in 2009, a nine year study done by the U.S. Geological Survey, demonstrated that 44% of the largemouth and smallmouth bass turned out to be intersex. Some rivers had 91% of the male bass turning in to female bass. They found 34 of the 111 sites in 8 of 9 major river basins including Columbia River, Colorado River, and the Mississippi River had feminized male fish. The Southeastern United States Rivers seemed to have intersex bass in all the rivers in all sites including the Apalachicola River, Savannah River and Pee Dee River. The question is why? 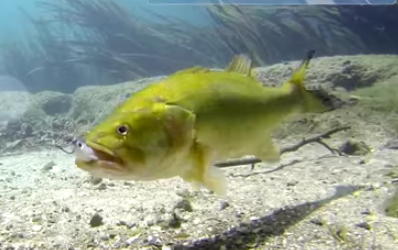 US Geological Survey scientists hypothesize that toilets flush birth control pills, pesticides, and laundry detergent into the sewer. During a seven year study, researchers added parts per trillion of birth control pills emitted by the sewage treatment plants to a closed lake and found that males to changed to females. The sex change resulted in a population collapse. These endocrine disrupting chemicals changed male fish into female fish at parts per trillion.

In some cases intersex fish were found above and below the sewage treatment plant output and some think that run off from agriculture is causing the problem. Chicken and cattle at that time were given hormones to grow faster. The chicken and cattle feces contained the hormones and were washed into the rivers. Vicki Blazer, a USGS biologist, noted that that a weakened immune system is suspected in killing 80% of the small mouth bass. The white blood cells (fend off disease) have receptors for hormones, and Blazer suspects that endocrine disrupting chemicals have been adversely affecting the basses immune system.

The worry is that the same hormones found in the water that affect fish also affect humans. These hormones can act together synergistically. There are no regulations controlling them. They have identified nine of them, but there may be hundreds or even thousands of different compounds that are hormone active that are active at trace minuscule amounts. Mae Wu of the Natural Resources Defense Council believes that the water may be a witch’s brew of endocrine disrupting chemicals. Mae Wu states, “We have no idea what it does to humans.”

Several researchers have identified 17-beta-estradiol, estrone, and 17-alpha-ethinylestradiol in the water as fish feminizers. These are natural and synthetic estrogen found in birth control pills. Alkylphenols are chemicals from breakdown products found in detergents and plastics can also cause feminization. However, as stated above, there are many hundreds or perhaps thousands of chemicals present in the water at trace amounts that have NOT been tested for hormone disruption. [1,2,3]

Female mosquito fish turning into male mosquito fish in rivers below the paper mill wastewater outflows were found. Female mosquito fish developed male genitals and male courtship roles. However, the female fish still had ovaries and were able to give birth to live babies.[4,5,6] It is not known what exact chemical causes the masculinization. Sterols made by plants from the cooked wood pulp are suspected to contain the chemical. Bacteria in the river can convert these sterols into male hormones to affect fish development.

Waste water from paper and pulp plants seem to lower the fertility of both male and female fish. Wild fish in Norway, Sweden, and Canada have lower endogenous sex hormones. They take longer to reach maturity and have trouble reproducing. The paper plants were required to remove the chlorine bleaching in an effort to make the paper plant more environmentally safe, but this did not help the fish. So, it is thought that something intrinsic to the wood is decreasing the fish’s fertility. [7]

Hayes, a researcher, found that at 0.1 parts per billion of atrazine, a common herbicide, caused between 16% and 20% of African Clawed Toads to develop reproductive organ deformities. Normal frogs have two ovaries if they are female, or two testes if they are male. However, at 0.1 parts per billion of atrazine 16% to 20% of the animals had either too many gonads or mixtures of testes and ovaries. For example, there was one hermaphroditic frog that had 3 testes and 3 ovaries. If the tadpoles were exposed to 1 part per billion and above, the adults were feminized. Normally, the voice box or larynx of a male frog is much larger than a female’s larynx. However, the atrazine treated males had larynges smaller than normal males and larger than normal females. The female frogs teated with atrazine did not have any change in larynx size. Adult males treated with an even higher dose of 25 parts per billion of atrazine showed a 10 times decrease in testosterone compared to normal males. Essentially, the atrazine castrated the males at 25 parts per billion. It seems that atrazine enables aromatase conversion of testosterone to estrogen. 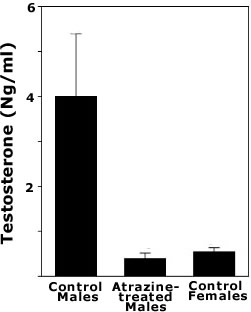 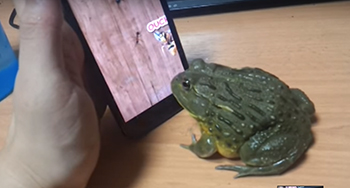 Thus, this landmark study solidly indicates that declining frog populations may in part be due to widespread atrazine use. Recent research implicated infection by chytrid fungus as an important driver for frog extinction. However, it may be that environmental contaminants are destroying the frog’s immune system as well. However, I could not find any research exploring how environmental toxins were lowering frog immunity.[8]

The University of Florida, the Florida Game and Freshwater Fish Commission, and the U.S. Fish and Wildlife Service conducted an excellent study on the feminization of the alligator population of Lake Apopka. Lake Apopka is a 12,500 hectare lake, and is the 4th largest lake in the state of Florida. Lou Guillette, a University of Florida reproductive biologist, surmised that the population declines in the wild that occurred over a decade started with a 1980 chemical spill from Tower Chemical Company. He discovered that the synthetic chemicals acted like hormones.

Guillette got the idea in 1992 from professor Howard Bern, a comparative endocrinologist at the University of Berkeley. Professor Bern gave a lecture at the University of Florida about his pioneer work on DES and the discovery that developmental abnormalities occurred in birds exposed to synthetic chemicals. Bern had learned about this at the Wingspread Conference Center a year earlier. Bern’s developmental abnormalities were the same as the ones that Guilliette had found in Florida. Guilliette had originally expected the chemical spill to cause cancer or death. Bern’s lecture gave them a brand new paradigm to look at chemical contamination with a new set of questions. Guilliette knew that the problems were caused by contamination, but did not realize that it was a hormonal effect.

The chemical spill created one of the most serious Superfund hazardous waste sites. The chemical spill was dicofol a close cousin to DDT. DDT also interferes with hormones. When the news of hormone disruption broke out in 1994, journalists came to lake Apopka to document and record the small penises of the alligator that are one third to one half the normal size of a normal penis. The smaller penises were more of a problem with alligators that lived in close proximity to the chemical spill. Penis size is smaller at lake Apopka compared to a pristine lake. However, there are even some symptoms of small penis size in other lakes (although not as severe as Lake Apopka). Researchers are considering agriculture chemical run off as the cause in these lakes.

Both sexes of alligators have dramatic internal disruption of reproductive organs. Female alligators show abnormal eggs and ovaries. The eggs

Guillette was startled that the the red eared turtle also had reproductive difficulties. Usually, the apex predator has the most problems because the toxins bioaccumulate in the prey. Plankton eats toxins. Small fish eat plankton. The small fish bioaccumulate the toxins from the plankton. Larger fish eat the small fish. The toxin is further accumulated. Finally, the alligators eat the large fish and accumulate the most toxins. In contrast, the red ear turtle eats plants. The red ear turtle is on the bottom of the food chain. However, the red ear turtle also had reproductive problems. Researchers found female turtles and no male turtles. They found intersex turtles. Intersex turtles are neither male or female. Intersex turtles are in-between male and female. The turtles that should have become male became intersex turtles. There were few normal male turtles.

The turtles and alligators in Lake Apopka are experiencing hormone disruption - that much is certain. However, it is not known the exact chemical or chemicals that are causing the problem. The leading suspect was DDE a metabolite of DDT. DDE is from dicofol, and is the highest concentration of toxin in the alligator eggs. Other endocrine disrupting chemicals that are also suspect include dieldrine and chlordane. Researchers painted DDE at one part per million on the alligator eggs. This concentration was enough to create intersex alligators. The alligator hatchlings from Apopka Lake had levels of 4-5 parts per million of DDE.

There is no question that hormone disruption is affecting the wildlife in America. These chemicals are also affecting humans as well.