Researcher David Allison at University of Alabama states the American people were getting fatter over the last 20 years. And so were lab macaques, chimps, monkeys, and rural rats and feral rats. Researchers examined 8 different species and found that the average weight has been increasing steadily over the past 20 years. Chimps were doing very badly with a 35% increase of weight per decade. Allison notes that in every population of animals they looked at, their weights went up.

This is perplexing in that lab animal's diets are strictly controlled. The lab animals had no significant change in either activity or diet.

Xenoestrogens, or "FrankenEstrogens" are being implicated in the steady increase of weight of all these animals. Leonardo Trasande at New York University School of Medicine tested BPA levels in the urine in 2,835 American children and teen. High levels of BPA were correlated with a 5 times more likely chance of being obese.

BPA is Bisphenol A. BPA is an additive in plastics and varnishes that prevents breakdown of the plastics. BPA is a xenoestrogens.

Estrogen, in general, tells the body to store up fat for the upcoming pregnancy.

Another article on obesity. 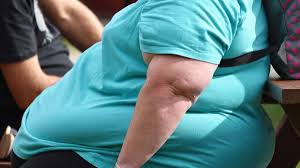